The hotel is located at the lower zone of Albena resort and is built on the ground of the previous hotels Dorostor and Kamelia. The main aims of the project of the new hotel were the preservation of the traditional step-like silhouette of the old building, orientation of maximum amount of hotel rooms towards the sea view, and domination of the white colour, as a tradition of Albena resort.

The hotel is separated in five sectors, including 238 business units, 39 of which studios and apartments.

The communal area is developed in three over ground levels and a semi-underground one. The first level accommodates a lobby and a lobby-bar, a shop, a reception zone, two conference halls with 300 people capacity and an a’la carte restaurant with adjoining terraces.

A stainless steel wellness zone with a covered pull is built on the third floor. It has massage rooms, cosmetic and fitness halls, sauna zone (Finish sauna, steam room, salt room), relax zone and others.

On the same level a multifunctional conference hall was designed with a capacity of 500 people.

The semi-underground level is planned to have a night club with a 150 people capacity and a parking with 19 cars capacity.

The pool area includes a main pool with different function zones and attractions, including two 25m swimming lanes; kid’s pool with a pool prater; water slides and a baby pool. Small pools were built on the ground level of two of the hotel sectors for the adjoining rooms and with a direct exit toward the yard area and the resort’s sea alley.

The complex also has a kids club, covered stage for animation, snack bar and other service areas.

The interior design is by the Parisian design studio Borella Art Design. The realization was done by Albena Design Bureau. 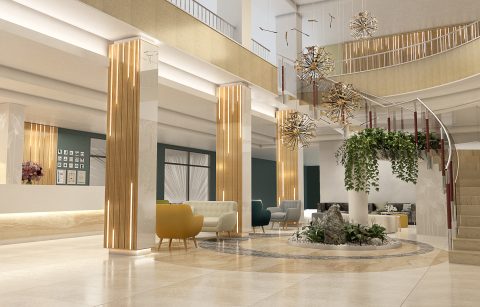